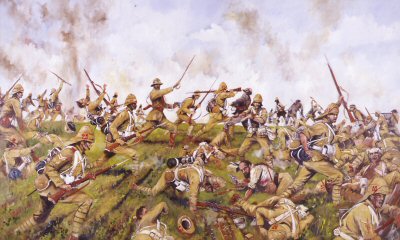 W.Bro Gary Anstead has begun researching a few of the former members of Redwood Lodge, and has been entertaining us at the festive board. Please find below an adaptation of his notes.

Colonel Henry George Clay, CBE was a joining member of Redwood Lodge 3411 on 9th September 1912. His mother lodge was Ormond Iles 3443, a lodge formed in Shwebo in Burma. Clay became Master of this Lodge in 1911. He was proposed into Redwood by W M Hill and was the Lodge Director of Ceremonies of Redwood in 1913.

Clay enlisted on 24th July 1889. After serving in every N.C.O. rank, Regimental Sgt Major, and district Sgt Major, 31st Regimental district, he obtained his commission on 23rd May 1903.

During the South African war he was wounded twice, once at Vaalkrantz, and then on the 15th December 1899 at Colenso when he was a Captain Sgt serving with the 2nd Battalion East Surrey, Natal Field Force. Natal Field Force (NFF) was a multi-battalion field force originally formed in Natal for the First Boer War. It was later re-established for the Second Boer War (1899–1902).

Clay was involved in the battle for Spion Kop, the largest hill in the region, being over 1,400 feet (430 m) in height. It lay almost exactly at the centre of the Boer line. If the British could capture this position and bring artillery to the hill then they would command the flanks of the surrounding Boer positions.  It was fought between the South African Republic and the Orange Free State on the one hand and British forces during the Second Boer War, The British climbed up the hill at night and in dense mist. They surprised the small Boer piquet and drove them off the Kop at bayonet point. Of the 15 men in the Boer piquet, one was mortally wounded and his grave lies on the hill to this day. Ten British soldiers were wounded in the charge. The surviving Boers retreated down the hill to their camp waking up their fellow Boers by screaming “Die Engelse is op die kop!” (‘The English are on the hill!). A half-company of British Sappers began to entrench the position with a mere 20 picks and 20 shovels (while almost 1,000 soldiers stood around idle).

For Clay’s bravery at Spion Kop Queen Victoria presented him with a scarf knitted by herself, only five scarf’s were ever knitted and presented to only the most deserving men, a very big honour. Clays actual scarf is on display at the East Surrey Regiment Museum at Clandon House Guildford. Clay also received the Distinguished Conduct Medal in the South African War.

He was appointed recruiting Officer 31st Regimental district, in December 1911, on the 1st August 1917 he was promoted to Colonel. He transferred to the Ministry of National Service, in 1926 and was appointed Chief Recruiting Officer. He has recruited for the army and the regiment for 25 years. It has been said of him that what he did not know about recruiting is not worth knowing. Between 15000 and 20000 recruits have passed through Great Scotland Yard since Clay has been there, and every recruiting officer since 1926 has owed something to his example and system. For his services during the 1st World War he was awarded the CBE.

‘Lest we forget association’ is one of the charities that Redwood still give to every year, Clay was the Chairman and Founder of this and I am sure it was he that must have proposed this in open lodge all those years ago. He retired as a soldier on 31st December 1936 after 37 years service.